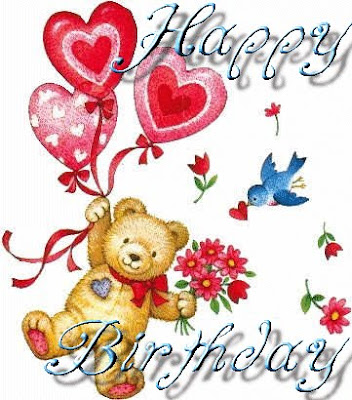 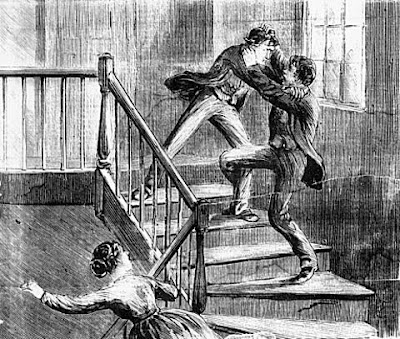 The combat was fierce now. Mabel decided she wouldn't be able to deal with it by herself after all, and ran to fetch the marshal.
Ben was below, at a disadvantage, but he was a gamer. Grabbing a handful of Asa's hair in one hand and twisting his ear with the other, he uttered a stream of constant obscenities while all the time grunting and blowing his garlic breath in Asa's sweaty face.
Asa held his own, still trying to hypnotize Ben, but having little effect. Dizzy now from holding his breath against the garlic onslaught, Asa was about lose consciousness and tumble down the stairs, and he knew it.
Ben hooked one leg around Asa's in an effort to hasten the tumble. He grinned inwardly in satisfaction as he heard Asa's knee crack.
"CODSWALLUP!" cried Asa as he let go of his breath and the garlic fumes filled his lungs. Eyes watering profusely now, face flushed, the room spinning, Asa left off his mesmerizing and began to hawk up great clots of garlic-tainted phlem to project into Ben's livid and leering face. It was his only defense now. Making sounds like a cat with a furball, Asa met with success and let fly.
"RASCAL!" "DISHONORABLE TWADDLE!" Ben screamed the invectives, as the vile effluent stung his eyes. "MOLLYCODDLE!" "GOATLOVER!"
The marshal burst into the door and took the stairs two at a time, landing the butt of his drawn pistol solidly into Ben's right kidney. Ben's body went limp and he dropped like a bag of rocks at the marshal's feet.
"Sweet Lord Jesus! Mama come get your baby boy!" Ben implored as he writhed in agony.
With Ben out of the way, Asa tumbled forward in a dead faint.
As Asa tumbled down the stairs past his feet, rolling over the groaning Ben, the marshal shot him in the back at close range. Asa's body stiffened and his coat caught on fire from the close range blast of the marshal's .44.
"Freeze," the marshal barked at Asa.
Miss Mabel had returned and saw the whole thing. "I think you're supposed to say freeze before you shoot, Marshal," she opined.
"I'm new to this job," he shrugged. "I'll remember next time."
Suddenly Ben moaned and began to come to.
"BLAM," said the marshal's .44.
"Damn," said the marshal.
Miss Mabel rolled her eyes and shook her head in exasperation.
(to be continued)
Posted by Relax Max at 7:45 PM 9 comments: 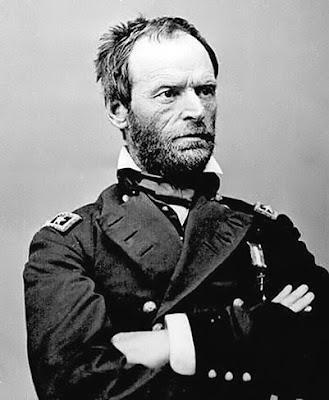 1. Prince Edward Island is the 104th largest island in the world.
2. Nova Scotia means "New Scotia."
3. Halifax is where the remains of the Titanic victims **that were recovered are buried. (**Those that were not recovered are not buried at Halifax.)
4. People who are from Newfoundland pronounce it New FOUND lund. Not NEWfunlund.
5. The French settled the island of Nova Scotia, only they called it Acadia. Actually, the island we now call Nova Scotia was PART of the old Acadia. (If you are ever on a game show and they ask you that question.)
6. The French Acadians departed Acadia right after the British came and kicked them out.
7. Actually, the French Acadians left Acadia during the American Revolution because all the American Loyalists fled America and a heap of them went to Acadia. Only they called it Nova Scotia. (Which, loosely translated, means "Tory Heaven.")
8. So the French Acadians fled south to French Louisiana to live and still be French. However, a few years after the migration, Napoleon sold Lousiana to the new United States out from under them, and so the Acadians were screwed again. They mostly slunk back into the bayous and kept speaking French while the Americans came in and took all the oil and stuff. The Americans couldn't understand the Acadians' speech and thought they said "Cajuns" so they started calling the Acadians that. Then the Acadians gave up and started calling themselves Cajuns, too. They still swear at you in French, though, if you intrude on their fishing waters back in bayou country. Only the French can't understand them anymore, either. It's a long story. Beaucoup and merde are about the only words you can make out anymore. Except for some basic early Anglo-Saxon words mixed in. Sorry this odd fact was so long.
9. As far as I know, there are still no statues of William Tecumseh Sherman in downtown Atlanta.
I'm going to leave this list at 9 because 9 is a lucky number and also because it will piss off the metricheads who think everything should come in units of ten.
---------
As an added bonus to those loyal readers who actually read down this far, the following is more for you to read if you want to. You will probably have to click on it to make it large enough to read unless you enjoy squinting. Did any of you see the movie "Water Boy" with Adam Sandler? Remember them biting the heads off barbecued baby alligators at the picnic? Anyhow, that's how Cajuns talk, sort of (in that movie.)

No one has EVER accused me of being a good speller. But...

Some of these are more interesting than simply bad spelling. Some are surreal.
Culled from some online posts and comments:
"Think of it as your car's breaking system..."
"Slowly but surly..."
"i did the same thing and ended up dying a few months after i got my laptop..."
"...if you leave it on and on a soft surface it can cause a fire or overheating of your laptop which will defiantly harm it."
"...it kills the battery and shortens it's battery life..."
---------
Some unanswered technical questions I will take stabs at:
Q: Blue screen of Death... does anyone know the solution?
Relax Max answers:
1. I advise you to try a solution of one cup of dish soap per 5 gallons of water.
2. Buy a Mac.
3. I'm sure Microsoft will be glad to help you for free and will answer the helpline promptly.
4. 146?
5. Use it for a paperweight.
6. Is this another question about car breaks?
Q: Should I buy the iPad 1 or 2?
Relax Max answers:
That's a poser. Let's see... the new iPad 2 has several more features, is more compact, has a ton of new apps, comes with 2 cameras, has a cover, is faster -- and it costs exactly the same. Tough choice, I agree. I would advise you to buy the original iPad.
Q: How do I plug my laptop into a TV?
Relax Max answers:
1. Use your hand.
2. Very slowly.
3. Into the lower part of the screen. Press firmly.
4. Tell us again why you want to do this. Do you think the TV picture will magically show up on your laptop? Do you think your blog will we seen by millions? Are you just looking for a power source? What?
Q: Laptop internet connection?
Relax Max answers:
1. Yes. Yes, indeed.
2. Blue.
3. Using a laptop on the internet is not possible, dude. Sorry.
4. That's an incredible idea. Try to patent it.
Posted by Relax Max at 6:08 PM 5 comments: 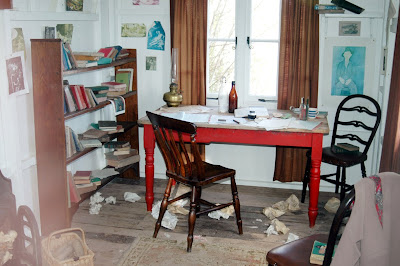 Relax Max's little doggie heart was waxing poetic on this sunny Sunday and he took up pen and pad, sure that this would be the day he would finally learn to write poetry.
The words flowed this time, the words sublime, the loosed metaphors fell in rhyme,
Sure to wring those tears from the stars this time.
And, finished, smug, it all worked out, ready to take my place with the poets great,
I made the mistake of daring to compare my masterpiece with those before,
Just to confirm I was their equal.
The pages in the worn poetry book opened of their own accord to Wales and Dylan Thomas,
And though long dead, and probably quite drunk when he wrote it, his random words still mocked my talent:
"Time held me green and dying
Though I sang in my chains like the sea."
I closed the book and threw mine away.
Posted by Relax Max at 1:38 AM 6 comments:

The Wizard of Westwood 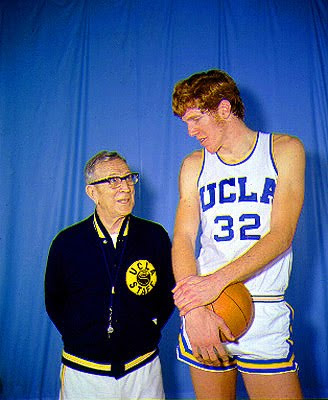 Happiness begins where selfishness ends.
—Coach John Wooden
---------
And.....
A coach is someone who can give correction without causing resentment.
John Wooden

Adversity is the state in which man most easily becomes acquainted with himself, being especially free of admirers then.
John Wooden

Be prepared and be honest.
John Wooden

Failure is not fatal, but failure to change might be.
John Wooden

If you're not making mistakes, then you're not doing anything. I'm positive that a doer makes mistakes.
John Wooden

It isn't what you do, but how you do it.
John Wooden

It's not so important who starts the game but who finishes it.
John Wooden

It's what you learn after you know it all that counts.
John Wooden

Material possessions, winning scores, and great reputations are meaningless in the eyes of the Lord, because He knows what we really are and that is all that matters.
John Wooden

Success comes from knowing that you did your best to become the best that you are capable of becoming.
John Wooden
Success is never final, failure is never fatal. It's courage that counts.
John Wooden

Success is peace of mind which is a direct result of self-satisfaction in knowing you did your best to become the best you are capable of becoming.
John Wooden

Talent is God given. Be humble. Fame is man-given. Be grateful. Conceit is self-given. Be careful.
John Wooden

The main ingredient of stardom is the rest of the team.
John Wooden

The worst thing about new books is that they keep us from reading the old ones.
John Wooden

There are many things that are essential to arriving at true peace of mind, and one of the most important is faith, which cannot be acquired without prayer.
John Wooden

You can't let praise or criticism get to you. It's a weakness to get caught up in either one.
John Wooden

You can't live a perfect day without doing something for someone who will never be able to repay you.
John Wooden 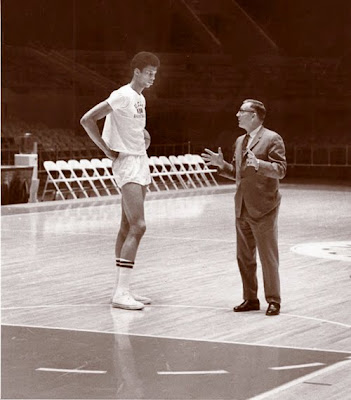 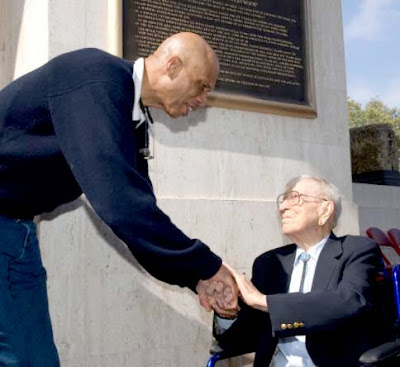 Dancing talent runs in the family 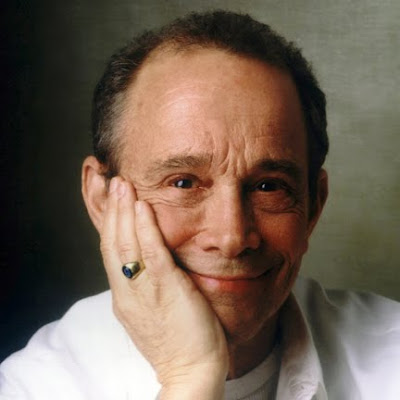 I hadn't thought of the inestimable Joel Grey (also pictured in the previous post in makeup from his role as Master of Ceremonies in Bob Fosse's 1972 hit movie "Cabaret") too terribly much until I saw him on TV in the audience of "Dancing with the Stars" recently, which his daughter Jennifer won. Jennifer is 50 now, so Joel must be in his 70s. Time flies. 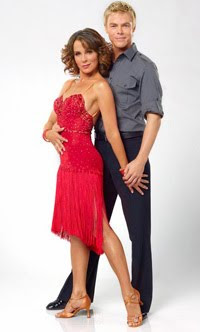 She wasn't what you'd call
A blushing flower...
As a matter of fact
She rented by the hour.

The day she died, the neighbors
came to snicker:
"Well, thats what comes
from too much pills and liquor."

But when I saw her laid out like a Queen
She was the happiest...corpse...
I'd ever seen.

I think of Elsie to this very day.
I'd remember how'd she turn to me and say:
"What good is sitting alone in your room?
Come hear the music play.
Life is a Cabaret, old chum,
Come to the Cabaret."

And as for me,
I made up my mind back in Chelsea,
When I go, I'm going like Elsie.
Posted by Relax Max at 6:10 PM No comments: