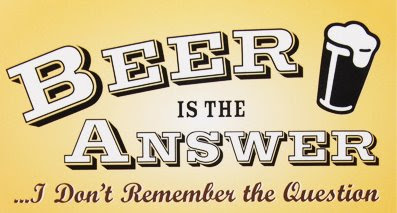 You are invited to comment with jokes that have to do with pubs/bars. I will start you off with a few.
--------
Six retired Irishmen were playing poker in Monaghan's flat in Dungarvan when Sean O'Toole loses €700 on a single hand, clutches his chest and drops dead at the table.

Showing respect for their fallen brother, the other five continue playing standing up. Michael Lennon looks around and asks, 'Oh, me boys, someone's got to tell Sean's wife. Who will it be?'

They draw straws.
Cavan Colquhoun picks the short one. They tell him to be discreet and gentle and not to make a bad situation any worse.' Discreet? I'm the most discreet Irishmen you'll ever meet. Discretion is my middle name. Leave it to me.' announces Cavan.

He goes over to O'Toole's house and knocks on the door.
Brenda O'Toole answers and asks what he wants. Cavan declares: 'Your husband just lost €700 and is afraid to come home.'

'Tell him to drop dead!' snarls Brenda.' I'll go tell him.' says Cavan.
--------
Mary was asleep in bed when her husband, Patrick, crashed through the front door at 3 am waking her up. He staggered through the hallway and tried to get up the stairs.

'What are you doing?' Mary shouted.
Patrick replied, 'I'm trying to get this gallon of beer up the stairs.'

'Leave it down there, Patrick', Mary bellowed. 'I can't, 'Patrick replied, 'I've drunk it.'
--------
Neil was in a pub, extremely drunk. The barman, Simon, noticed this, and when Neil asked for another whisky, the barman politely told him that he was too drunk to be served another drink.

Neil leaves. He walks out of the pub and in again at the side door and asks Simon for a double whisky. A little frustrated, Simon repeats the answer he had said earlier.

Neil, again leaves and enters through a further side door, walks up to the barman and asks for a Scotch. Simon is now quite annoyed, and tells Neil he is too drunk and to get a ride home and leave the pub.

Once more, Neil leaves. Again he comes in, this time through the back door. Neil walks up to the barman and before he can say a word, Simon explodes at him, 'I told you already, you are way too drunk, you can not have another whisky. Get out of my bar!'

Disgruntled, Neil glares at Simon and asks, 'Man, how many bars do you work at?'
Posted by Relax Max at 11:31 AM