Party news: it could happen 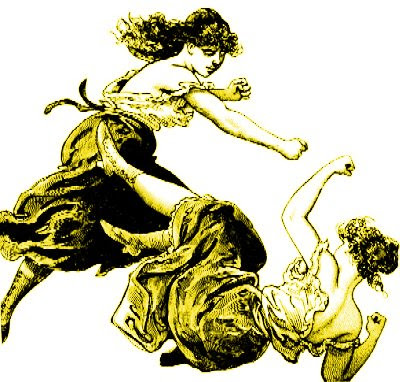 Although I am admittedly having trouble setting up certain portions of the entertainment for the pub party tomorrow, I did want you to know that I thoroughly enjoyed the entertainment at the awards banquet that Lord Likely provided as part of my Golden Cock award. Of course, I had to travel back in time to see it, and there is hardly enough room in the time machine for more than three people, but I did want to share some of the excitement with you.
Probably this is not going to happen at our party, either between Petra and Claire, or between Petra and Chica. Or between anyone else. Pole and lap Dancers, hen-party male strippers (of the natural hairy kind, and smooth boy belly shotters are still on as far as I know.
----------------
Also...
Last night at the pub we held the preliminary round of the pool tournament. The finals will be held Saturday at the party. Caroline beat Claire last night in the semi (three-hand division) but Claire has lodged a protest over Caroline's "double-double" technique, so it is still up in the air. See photo below. 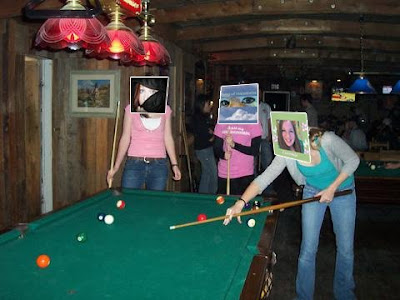 In the above photo, we see Caroline playing with herself as Claire waits her turn for a shot at her in the 3-way elimination round last night at the Slap and Tickle. Caroline won quite easily, in fact Claire took quite a pounding as she just couldn't seem to get her balls to drop all night. However, a formal protest has been lodged, with Claire contending that the rules do not allow for double-avataring, and that such tactics amount to piling on. Both ladies are from the North of England. The finals will be held Saturday night.
[Expert PhotoShopping by Chica. Thanks Chica.]
Posted by Relax Max at 7:03 AM