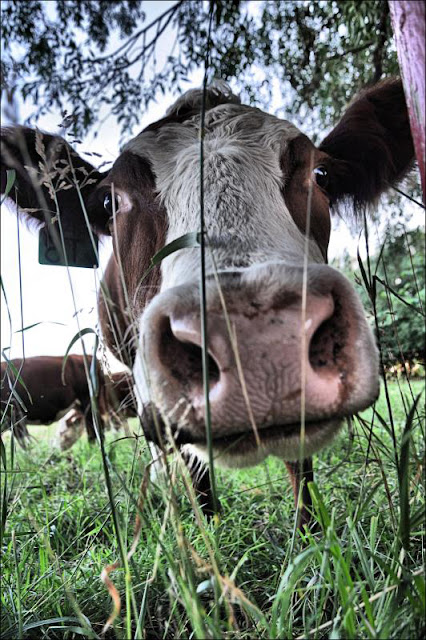 From an old post to a photography forum by a Russian lady, commenting on the original poster's photos of cows in a pasture, including wet noses close up:

"Nice images, but I won't go near those type of cows. The one day I was minding my own business walking through the woods. I stumble upon a farm, from a distance I saw those cows (at first I thought they were bulls (some did have horns). Well they only way out of the farm was to walk right passed these cows. They all stared me down and walked very quickly towards. Good thing there was a fence, otherwise I might not be here today."

Commenting was now disabled on that rather old post, but someone should have enlightened the city girl a bit. Such as:

"The cattle were coming toward you because cows are preoccupied with food and humans are associated with food. Humans might give grain or hay, which is a pleasant change of pace from simply grass all day. What would have happened had you not run away and there had been no fence? Probably nothing if they were cows or steers. They would have probably stopped at a safe distance and waited for you to produce food. And if you didn't? Would they attack you in anger? No, most likely they would have lost interest in you (when they realized you were useless) and simply ambled away. P.S. - The girls might have horns too, depending on the breed, if someone hasn't cut them off. That's not how you tell if it's a bull."
Posted by Relax Max at 1:02 PM