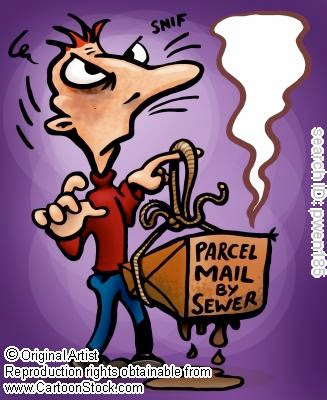 USPS sent my parcel to the wrong country.. !!
i was expecting a EMS parcel and it tracked it last night. it arrived in Australia instead of New Zealand.

My god... does that ever happen to anyone here?

and how long did that take you to resolve it?

i called USPS this morning, they told me to get sender to give them a call.

oh I understand your frustration. Hopefully it's just in transit. Maybe try to call NZ post and ask what's going on... they might be able to tell you if it's just a transit or not...Are you quite sure it is not just in Australia en route to New Zealand?

Right. I'm gonna call New Zealand.
i called USPS.. now i need to get the sender to call in order to re-direct... that is crazy.. how can they send to the wrong country.
I once sent something from US to South Korea and it was routed to South AFRICA. I called USPS and they put a trace and found the package then rerouted it to south korea

Who cares?
i googled the same issue last night. apparently it happens to a lot of ppl.
omg a nightmare! Especially when it's out of your control... Hopefully everything will be OK and you don't have to wait too long for your parcel to arrive at your place... sometimes it's the chasing around that's really annoying...
Wait, did the postal service mess up or did the seller misaddress the package?
Seller?
Just leave it up to0 the post office
I sell internationally on occasion and the post office needs to type in the address info for priority and express mail. Australia and NZ are close together, so it's possible the representative typed it in wrong? Or through they were the same... As a second grade teacher for years, trust me lots of people don't know better. It also could have been sent to the wrong place altogether. USPS will probably only deal with the seller on claims so as long as he\she puts a tracer and the package is insured & tracked, it will end up where it's supposed to. What a headache!

A and N are close together? And you are a teacher?
Seller?
I hope it gets dorted out asap..
I have a similar, well, worse experience with EMS. I sent wedding invitations in bulk to my parents in South Korea. Supposed to arrive in three business days. The package was sent to somewhere in Southern Asia (I never even found out where) and finally arrived at my parents' WEEKS later it was supposed to arrive, covered with MOLD and STUNK to high heaven. Apparently the package got wet at some point during the trip. Absolutely GARBAGE, and it was no use at that point anyway since it was a time-sensitive material. It was HELL trying to get a refund from USPS. I had to fill out many documents, make tons of phone calls, and wasted hours and hours at the post office dealing with exceptionally rude and/or lazy workers (there were a few exceptions.) It took me a solid YEAR to get a refund of paltry $75, barely what the invitations were worth.

Sorry about so many all-capital words, but it was such a nightmare that every time I think about it I get pissed off. Personally I would NEVER send anything valuable via EMS, not from the U.S. anyway. I trust DHL and have never had a bad experience with them, but I understand DHL isn't everywhere in the U.S.

OP, I'm really sorry about it and I do hope they straighten this out ASAP. Just my two cents, bug them like crazy until the problem gets solved. You really have to be pro-active in dealing with them. Document EVERYTHING. Was it time-sensitive?

Jesus
No, it's ok if they take 5 years.
one of my parcel is now in Canada.... It should be sent to China....
You should tell the post office instead of this forum. Just saying.
The only way they can send it to the wrong country is if you didn't put in the right information. Are you certain you put the correct information?

Do you really believe that, Polly?
sent my package (the same package) twice to Australia instead of Austria, and I put the correct information and address. That is so annoying.
My uncle ordered something online one time and instead of it being sent to Virgina, it got sent to Venezuela. I can't remember what ended up happening with that package, but they sent him a new one once they realized what the problem was. Good luck OP, stuff like this really sucks :(

When you remember, be sure and let us know.
recently i had shipped an item to carambatta, australia. i wrote australia in all caps below the address and it was still shipped to canada. usps can be hopeless sometimes. another package is currently taking a century to be shipped to australia via priority mail after being sent on november 14.

Why don't you use some caps here too? Don't cost nothin'.
Well, I'm wrong then. I can admit it. :)
That's a load off.
Oh no, thats absolutely awful!! Who are you buying from?
Buying?