With eyes that know the darkness in my soul... 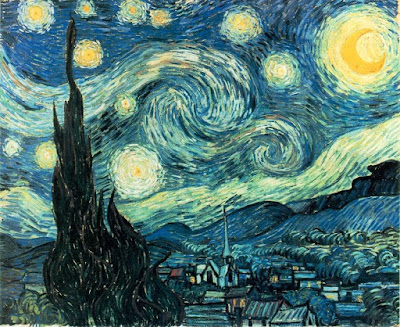 Starry, starry night.
Flaming flowers that brightly blaze,
Swirling clouds in violet haze,
Reflect in Vincent's eyes of china blue.
Colors changing hue, morning field of amber grain,
Weathered faces lined in pain,
Are soothed beneath the artist's loving hand.
Now I understand what you tried to say to me,
How you suffered for your sanity,
How you tried to set them free.
They would not listen, they did not know how.
Perhaps they'll listen now.
—Don McLean
---------
Vincent Van Gogh, I think, might well have been the Edgar Allan Poe of the world of fine art, if mental anguish is the measure of such things. He didn't start painting until his late twenties and most of his most important work was completed in the last two years of his life. Even so, his body of work consists of about 2000 paintings and drawings. How much of his mental illness is reflected in his work is only conjecture. He checked himself into a mental hospital for a time towards the end of his life. The windows had bars on them and he painted what he saw through those bars. Starry Night was painted during his stay at the hospital.
Vincent was mostly unappreciated during his lifetime and did not realize much financial success from his painting. Several of his paintings fetch upwards of $100 million today. "Portrait of Dr. Gachet" (1890) sold for $139 Million in 1990, a hundred years after it was painted. (Adjusted to 2011 dollars.)
1890 is also the year Vincent took his life. He was 37. 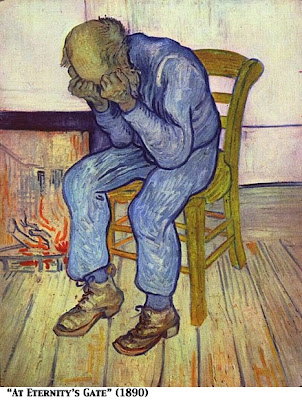