And on a sad note, Adullamite's long-time lady friend slipped on the ice today and was run over by a truck... 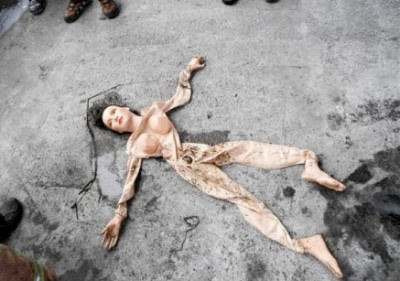 18 police officers worked for an hour in Shangdong, China to rescue a woman from a river while 1000 spectators gathered to rubberneck. Because of the large crowd, it became impossible for fire trucks to pass through. Police finally fished the woman out, only to discover the body was really just a blow up sex toy doll. (As it happens, most of these objects are manufactured in Shangdong for export. For the Southeast England market, I believe the article said.) Children's eyes were covered and the crowd dispersed. My theory is she was abducted from the place of manufacture in the lunch bucket of an amorous factory worker and was blown almost completely up on the river bank trysting place when a slip of the lips released her to fly off like a big balloon and land in the river.

I also have a theory on why she floated and how she bobbed up and down to elude police rescuers for so long.
Posted by Relax Max at 11:30 PM