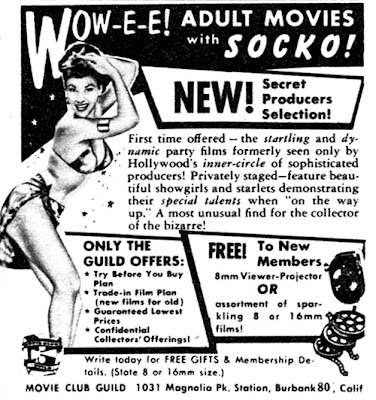 In the back pages of those old "men's" magazines were found the sources of the good stuff. Enough to make 12-year-old's hands tremble, make their imaginations run amok, make them short of breath. Oh God!

Previously (the ad said, so it must be true) only a select circle of Hollywood producers could indulge in these unspeakable delights, but finally (thanks to modern science?) all was laid bare (as it were) to the masses, the common man. Or common boys, as mostly happened. My own budget hardly allowed the luxury of expensive dirty movies, let alone the ability to buy a projector. But I read the ads, pondered, envisionated.

Mostly these magazines were found in drugstores, as I remember. Drugstores for some reason always had a large magazine rack in the back of the store across from the soda fountain. My friends and I, connoisseurs of the arts all,  patronized Palmer's Rexall Drugs (and photofinishing) in our little town. Main street. Three blocks up from the courthouse. There was no real concern with age in those easier times. Unless a woman waited on you; then she would call your parents and rat you out. So you stalled around for the proprietor to wait on you, an ancient old man named, um, Palmer. He was a pillar of the community, even had a street named after him. His first name was Carl but all of us boys referred to him as "The Weasel". I'm not sure why - the name was just handed down from generation to generation. The Weasel never refused your magazine business if you had enough sense to come in the store alone, in the evening when business was slow and he was the only one on duty. I think he may had lived upstairs. Rumor had it that he would also sell you a rubber if you had enough guts to ask for it (behind the counter of course) which you could then stuff in your wallet's coin compartment for safekeeping until you got lucky and needed it. For 12 year olds, this would usually be several years and in the meantime you could just take it out and show it to your friends for them to marvel at through the cellophane. The wrapping turned yellow and rotted soon enough, as did the contents, so if you ever DID need it, all you would get was dust. It's a sad and unfair world. I myself never worked up enough courage to ask The Weasel to sell me one of those, being always short of cash. Besides, I was a serious reader and not into the wonderful world of biodegradable latex.

Have your quarter ready and hand it to him and hope he didn't have time on his hands to try to embarrass you by making comments about the cover girl. ("She sure has pretty blue underwear, doesn't she, son?") I always tried to save up enough money from my paper route to buy two at once so as to only have to run the gauntlet every second time.

Now that a few years have passed, I suppose I really do know why all the guys called him the weasel.

I was going to talk about good hiding places, but I don't want to bore you. It occurs to me that ladies probably have different childhood memories than men do.
Posted by Relax Max at 4:24 PM