Opera at the pub tonight. Drinks on the house. Dress up. 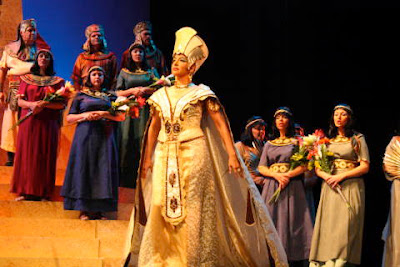 The opera "Aida" by Giuseppe Verdi (or "Joe Green" as Victor Borge used to refer to him) debuted in Cairo on Christmas Eve, 1871. The music is some of the best known, especially the "March" from the return of the conquering hero at the Grand Gate of Thebes, usually referred to more simply as the "Grand March from Aida." You can listen to an 8-minute version of this classical music piece at the end of this post. Or not. 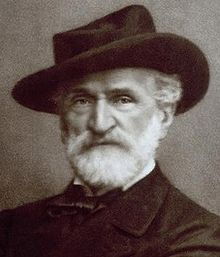 Aida, an Ethiopian princess, is captured and brought into slavery to Egypt. The young commander of the Egyptian host falls in love with her. Of course, she returns her enslaver's love. Hey, it could happen. Pharaoh's daughter also loves the guy, so prospects are dim for Aida finding joy in her new love. The commander doesn't return Pharaoh's daughter's love. Too bad for him, eh? The king of Ethiopia, Aida's papa, attacks Egypt to free his daughter (very likely) but is defeated on the battlefield by the warrior commander who wants only to become his son-in-law someday. Pharaoh's daughter finds out that Aida and soldierboy are loving it up and Aida is torn between loyalty to her homeland and for her father the king, and for her love for her enslaver and the prospect of probably being tortured to death by the pharaoh's daughter and I don't just mean waterboarding by god. I'll stop now because I sure wouldn't want to spoil the plot for those of you not familiar with this 140 year old opera. Those who sit through the entire 8 minutes will be rewarded with popcorn and free cider at the pub.