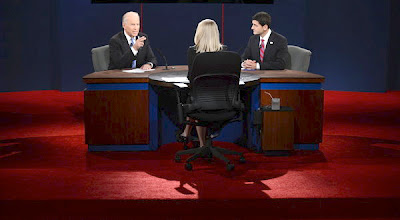 I watched the Vice-Presidential debate tonight, and felt it was a wash. I don't think anyone votes for President because of who his running mate is anyway. This debate, the only one for the VPs wasn't really even necessary.

Technically, I thought Ryan did better than I expected him to, and I thought VP Biden was as much of an arrogant ass as I thought before, maybe more so. But he made some points.

I think the only tangible purpose this debate could have would be to set up the next debate that "matters" next Tuesday, between the Presidential contenders. Biden made a few points that Obama left out in the first debate and Ryan hammered away at the same Republican points.

Many people will say Biden lost this debate because of his constant smirking and condescending attitude. But that doesn't lose debates. If you heard this on the radio instead of watching it on TV, I think Biden was the debating winner. But, since most people saw it on TV, they saw a buffoon being disrespectful to an earnest younger man. Who knows? I don't imagine many minds were changed tonight.

(If you watch an online video of the debate, bear in mind that the real TV audience did not see the moderator or the two men together sitting at the desk; all the TV audience saw was a continuous side by side shot of the men's heads and their facial expressions.)
Posted by Relax Max at 10:28 PM