Save time, call in your order 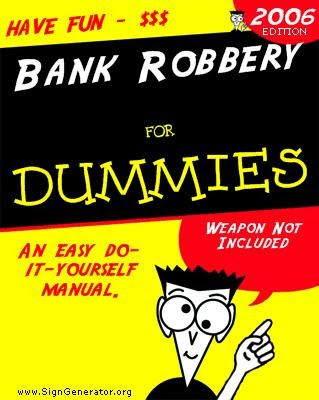 [March 25, 2010] Det. Lt. Michael Gagner of the Fairfield Police Department in Connecticut told reporters that they [police] had ample warning when it came to the robbery attempt at People’s United Bank branch in Fairfield. This is because the robbers decided to go the ‘easy’ route and call ahead to place a to-go order for the cash.

The alleged attempted bank robbers apparently called the bank and demanded that the teller get a bag of cash, containing one hundred thousand dollars, and have it ready for them when they showed up to get it. The alleged attempted robber went on to say that if the money was not ready, there would be a “blood bath.”

According to the Sgt, James Perez, the two men, residents of Bridgeport, 27-year-old Albert Bailey and an unidentified 16-year-old boy, showed up within ten minutes of making the phone call, and were arrested by the police on charges of attempted robbery and threats. He said that the two males were “not too bright.”