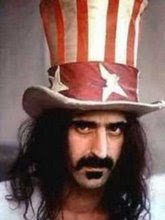 Hi! I'm Tal E. Wacker. Usually my contributions are restricted to the Way Harsh blog, but since Relax Max is drunk and passed out tonight, I get to pull extra duty here. Woopfuckingpee. Thanks a lot Max. You little turd ball.
I'm not used to being restricted to my blogging subject matter, since Way Harsh is pretty much an open blog, but I will try to keep it civilized here in order not to offend any of Max's tender readers.
By the way, some of you might be thinking I bear a resemblance to the late Frank Zappa. No shit, sherlock. Only this one is not housebroken.
So, let's see...what can we blog about tonight that's not very offensive? (Dull, in other words.) I see in the last post where a couple of smarty chicks accused Max of choking the chicken and bashing the bishop. So apparently that kind of talk is okay around here. So I will just make a post about masturbation terms and then get the fuck out of here.
For Chica and Caroline: Female masturbation euphemisms for your entertainment. Sort of like Lord Likely's masturbation post on BritishSpeak a while back, only the female version. The good ones are in red. There aren't many good ones, though. Many of the other ones I don't even understand. I just Googled the list. I have my own personal list, but that would probably drive most of you away. Don't want to do that. So here's the Google list. I kept it in alphabetical order in case you are taking notes:
Airing the Orchid
Beating the Beaver
Beating Around the Bush
Brushing The Beaver
Buffing the Weasel
Carpet Bumping
Checking for Squirrels
Cleaning your Fingers
Coming Into Your Own
Dancing the Taco Tango
Dialing the Rotary Phone
Digging a Trench
Doing your Nails
Dousing the Digits
Drilling For Oil
Engaging in Safe Sex
Erasing the Problem
Fanning the Fur
Fiddling the Bean
Fingerbating
Finger-painting
Fucking Without Complications
Gagging the Clam
Getting To Know Yourself
Going Mining
Groping the Grotto
Gusset Typing
Having A Clam Bake for One
Having A Night in With the Girls
Having Sex With Someone you Love
Hitchhiking South
Jillin' Off
Jocelyn Eldering
Letting the Fingers do the Walkin'
Making Soup
Manual Override
Buffin' The Muffin
Paddling the Pink Canoe
Petting Petunia
Polishing the Pearl
Playing Poker (Poke her. Get it?)
Playing Couch Hockey for One (Canadian?)
Playing with Mrs. Palmer's Five Daughters
Playing With the Man in the Boat
Pushing the Button
Riding the Unicycle
Engaging in the Solitary vice
Spelunking
Squeezing the Peach
Strumming the Banjo
Surfing the Channel
Teasing the Kitty
Teasing the Tuna Taco
Testing the Plumbing
Tickling the Taco
Tiptoeing  Through the Twolips
Posted by Tal E Wacker at 8:10 AM