Don't tell me Republicans have no sense of humor. Just don't.

1. Nancy Pelosi (D-CA) is the current Speaker of the House.
2. The Speaker of the House is elected by the House, but is by custom the ranking majority member (longest with their snout in the public trough of the party in power.)
3. Now that the Republicans will have a majority in the House (come January when the new thieves come to Washington) Nancy will, of course, no longer be the head honcha who sits up front with the gavel, and who decides what legislation will be accepted for debate. The job of Speaker of the House will fall upon the ranking member of the (new) majority party. This is one John Boehner (R-OH). Pronounced "beaner," I think (though he is not Hispanic.) John spends a lot of time in the tanning bed or is a heavy duty self-tanning cream user. At any rate, his face is orange. He looks quite healthy, in a sickly sort of way.
4. Nancy Pelosi announced today that she will be running for minority leader. Yo. Republicans had expected her to run back to San Francisco and hide under her bed, I think. But no.
---------
Nancy says she feels an obligation to run for the leadership position and stay in the fight since so many things remain unfinished. She especially wants to "continue" her fight for jobs for Americans.
Republicans seemed happy at the news:
"Given that there are now 60-plus defeated Democrat House members urgently seeking jobs due to Nancy Pelosi's failed leadership, we welcome her decision to run for House Minority Leader based on her proven ability to create jobs for Republican lawmakers." So said Ken Spain, a spokesman for the National Republican Congressional Committee.
Oh, touche. I thought we were going to work together? 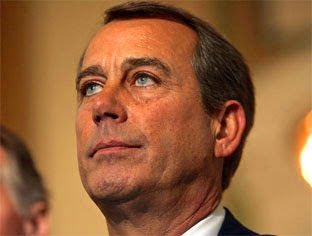